And to do so, they’re testing a full-scale 10-story wood building on the world’s largest outdoor shake table – a test of epic proportions!

The TallWood Project provides an opportunity for university students to gain hands-on experience in resilient building design and wood construction. Working with industry professionals across the globe, students have been tasked with “developing and validating a seismic design methodology for tall wood buildings that can quantitatively account for building resilience.” Simply put, students are trying to determine what type of tall mass timber building system provides resilience to occupants.

Prior research shows that due to wood’s lightweight and flexible nature, wooden structures have the potential to be more resilient than what the current building code states. Mass timber floors are commonly utilized, but what the NHERI TallWood team is looking to do is bring the use of a mass timber-based resilient lateral system into practice.

As regional leaders in both light frame and mass timber engineering, we were thrilled to get involved. Led internally by visiting PhD candidate Aleesha Busch from the Colorado School of Mines, our team volunteered our time and expertise to help bring the NHERI TallWood vision to life. 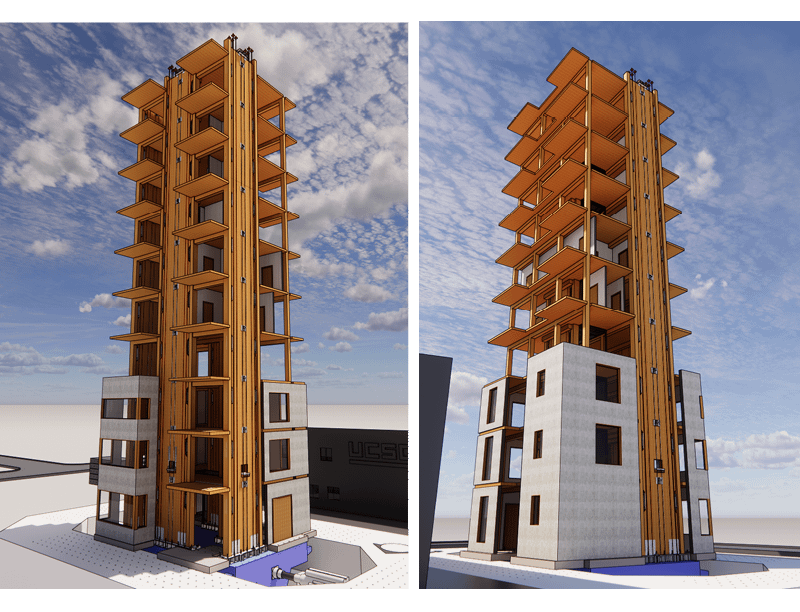 As one of the main PhD students in the program, Aleesha has been involved in the TallWood project since its inception four years ago. She has participated in each phase of the project, including the initial conceptual validation phase in which a two-story structure was designed and built to withstand multiple major seismic events without damage (our team also helped with this phase). The two-story version proved that rocking walls support the building during repetitive seismic events. The success of this phase gave the research team the confidence to multiply the system by five, reaching ten stories high.

A huge program milestone, construction of the prototype will begin at University of California San Diego (UCSD) in early 2022. Once construction is complete, all NHERI TallWood team members will gather at UCSD’s full-scale shake table for the seismic tests. Once built and tested, this 10-story structure will represent the tallest full-sized structure ever tested on a shake table – globally.

To prepare their systems for this history-making test, students have embarked on internships at collaborating firms. They’ve been able to both further their research and gain hands-on experience in their intended field. As our firm’s NHERI liaison, Aleesha oversees the effort and is the main connection between her research group and all other groups contributing their time and materials to the project.

According to Aleesha, “It’s been an invaluable experience connecting with individuals working in the field because they know the ins and outs of the industry. Even detailed items, like ‘what’s the right way to call this out in the drawing?’ That’s something we would never know to ask in a university setting.”

Structural Project Engineer, Carson Baker has been Aleesha’s primary partner at Coughlin Porter Lundeen. In addition to serving as Aleesha’s counterpart, Carson’s primary role has been designing the concrete foundation that will support the building’s nonstructural walls.

The Test in a Nutshell

In Aleesha’s words, “We’re primarily testing the main lateral force resisting system of the building, which is a group of innovative post-tensioned, mass timber rocking walls. We want to see how they perform under a major seismic load.” To dive a little deeper, once constructed, the walls will be post-tensioned to the foundation and designed so that they rock with the building. This rocking is what dissipates the energy and keeps a building upright during an earthquake. The entire lateral force resisting system is designed from a resiliency standpoint. For example, the walls won’t be attached as part of the gravity system of the structure, they’ll instead have shear keys at every level to transfer lateral loads. If sustained damage were to occur in the walls at the base, those components can be repaired separately from the gravity system. In the event of an earthquake, if designed properly, this system has the potential to protect the building from any structural damage.

The structure itself will be built out of laminated veneer lumber (LVL) beams and columns, two cross-laminated timber (CLT) walls, and two mass plywood panel (MPP) walls, with CLT walls installed perpendicular to MPP walls. The flooring system will start with two CLT levels, followed by two glulam timber (GLT) levels, then two nail laminated timber/dowel laminated timber (NLT/DLT) levels. All will be topped with four levels of veneer laminated timber (VLT). This unique flooring system is a newer concept being tested by Boise Cascade. The building will not be finished with any non-structural systems but will include a few non-structural interior walls and exterior curtain wall systems (at the bottom three levels) with specially designed features to achieve low damage performance.

Energy dissipation is key when designing for a seismic event. When a wall rocks, it needs to get rid of that energy without disrupting the rest of the building. The TallWood team’s solution? A series of U-shaped Flexural Plates (UFPs).

UFPs are small metal plates that connect the wall and the bounding columns. When the wall rocks, the U-shaped plates move with the structure to dissipate the energy and keep other parts of the building elastic. The goal is to concentrate most of the potential damage into these UFPs. While this concept has been used in concrete and steel rocking systems and shown promise in the TallWood team’s earlier two-story test, UFPs have never been tested in this capacity on a mass timber building of this scale.

If successful, this system could be adopted by practicing engineers for mass timber construction in regions with high seismicity.

Stay up to date with the NHERI TallWood project here.