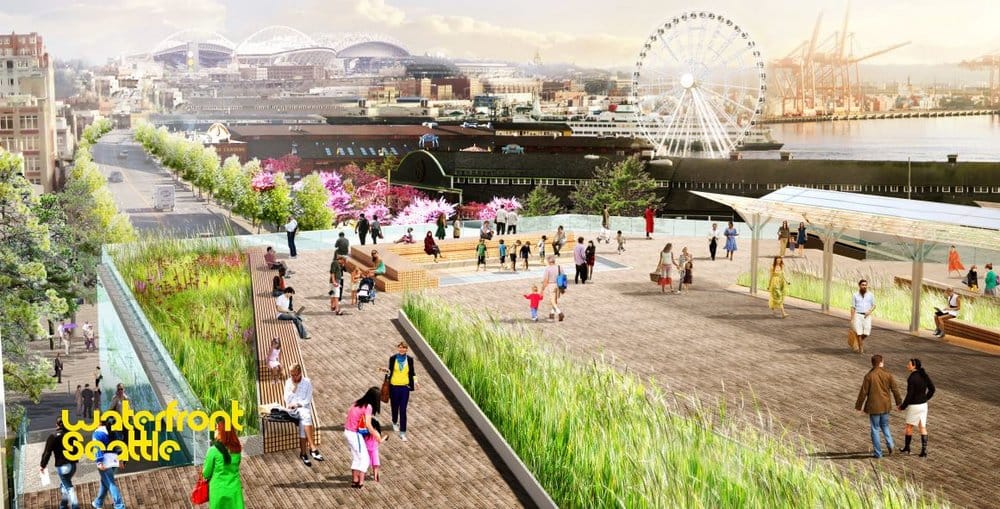 Joshua Curtis, Managing Partner with the City of Seattle’s “Waterfront Seattle Program,” visited our office this week, leading an informational session about the major, multi-year program to rebuild Seattle’s waterfront following the removal of the iconic Alaskan Way Viaduct (SR99) that spans downtown’s shoreline. Here are some of our top takeaways:

As-is, the vidaduct is not safe. (Keyword: Liquefaction)

“The viaduct was completed in 1953, and we’ve spent the last 60 years trying to remove it,” jokes Joshua. Locals familiar with the double-decker roadway have heard the stories and seen simulations of the projected catastrophe that would occur if Seattle saw another earthquake. Failure of the structure is expected, with liquefaction (caused by deterioration of the waterfront seawall) being the primary concern. Engineers deemed the Viaduct unsafe after the 2001, 6.8-magnitude Nisqually earthquake revealed flaws in the structure’s stability. Since then, Seattle has undergone major transportation projects to mitigate the looming threat of the Viaduct, notably, the decade-long underground boring project (Bertha) that will run a new, two-mile-long freeway, 200 feet below ground. With the viaduct gone, this will leave roughly 20 acres of open space, not to mention amazing views of the waterfront, currently blocked by the bulky two-story roadway.

There are lots of stakeholders to appease. (It’s a big change, after all.)

While the removal of the Viaduct will be bittersweet for some Seattleites, the designs and improvements the City of Seattle’s Office of the Waterfront present are sure to appease many. Joshua echoed Waterfront Seattle’s claims that, “big changes are coming to the downtown waterfront, providing an unprecedented opportunity for the Waterfront Seattle Program to create new public spaces and create a true waterfront for all.” The ongoing litigation of this massive project has been snarled by the numerous stakeholders involved. As Joshua put it, “players, process, and politics” have prolonged the uphill battle.  Joshua and his team at Downtown Seattle have been engaging with locals, listening to their concerns while also inspiring and getting people excited about what’s to come.

Public spaces are a priority. (The new waterfront is going to be sweet!)

Designed by James Corner the mastermind behind New York City’s High Line Park and numerous renowned projects around the world, in a few years, the Seattle waterfront will be a spectacular sight to see and place to be.

The project will stretch from Belltown to Pioneer Square and scope includes the rebuilding of the Elliot Bay Seawall, new surface streets, two-way dedicated bike lanes, public parks, pedestrian oriented pathways, bridges, and overlooks. The project aims, “to weave more public spaces into our urban fabric,” says Joshua. Among some of the most exciting changes include the expansion of both the Seattle Aquarium and Pike Place Market. The new MarketFront [Our MF blog post] was just the beginning, if you’re familiar with the current layout, the strenuous staircase up to Pike Place will be completely reconfigured and will be accessible to all. Other notable changes include the rebuilding of Pier 62/63 which will once again serve as a concert venue, along with a new public floating dock providing easy access to the waterfront for those travelling by boat.

The renovation requires a long-term vision. (Expect delays for the next decade or so.)

This is a massive undertaking and the transformation of Seattle’s waterfront will occur in multiple phases over the course of several years, with final a completion goal of 2030. For those who have lived in Seattle for the last 20 years, we’ve seen things change drastically with the arrival of major tech corporations like Amazon, Expedia and Microsoft. Urbanization is in full force and there’s no slowing down. Seattle has become a hot spot for tech companies, tourists, and transplants. All we can do is try and keep up, which is exactly what Waterfront Seattle aims to do:  “The waterfront should engage the entire city. It is a public asset and should remain focused on public use and activities that attract people from all walks of life. It should be a place for locals and visitors alike – a place where everything comes together and co-mingles effortlessly.” – waterfrontseattle.org

To learn more about the Seattle Waterfront Project, visit: waterfrontseattle.org