Share: A VR Hackathon Recap from our Technology Specialist

It’s 2:30 in the morning. The room is buzzing with fervent clicking, humming computers and anxious chatter. Two hundred excited minds are packed into Magnusun Park, the warehouse floor is a wasteland of sleeping bags, and there are only 32 hours left.

Coughlin Porter Lundeen Technology Specialist, Joel Hills, recounts his experience at Seattle’s Hackathon, where he and his team were given 48 hours to bring a VR concept from scratch to life.

Curious about virtual reality basics and how the technology is being adapted for AEC? Read our VR overview article, “Understanding VR (and leveraging it for AEC).” 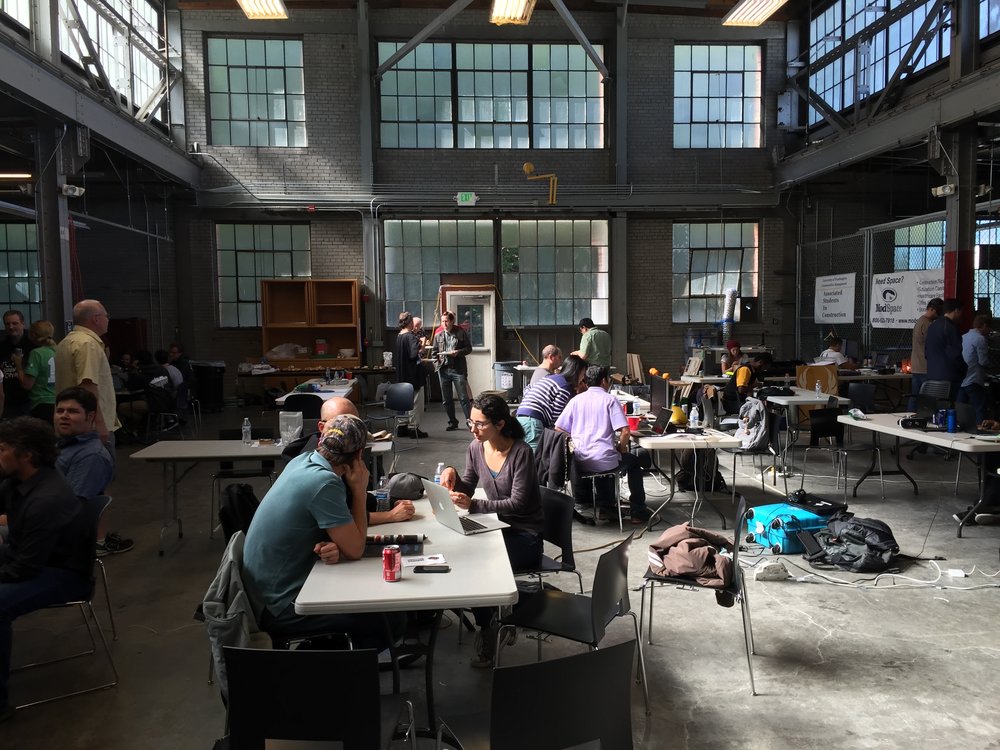 What exactly is a hackathon?

Hackathons have been around since the 90s. Bringing together people from all different facets of the tech industry, the weekend-long events are “innovation marathons” of sorts. Teams respond to the hackathon’s problem or prompt with custom VR solutions. Growing in popularity, hackathons are regularly sponsored by tech giants like Microsoft and Boeing, and often offer significant prizes to winners.

Dan Janes, computer science and technology entrepreneur, mentor and investor, is a firm believer in these events. He claims, “The VR Hackathon provides an exploratory environment where disruption, innovation and creative ideas are brought to life. It looks to bring together crowd-sourced knowledge for the advancement of virtual reality and complementary technologies.”

Attendees vary in age and skillsets, and includes everyone from software developers and gaming enthusiasts, to graphic designers and sound experts. Once onsite, teams are self-formed based on the ideas they are most interested in. Instead of hierarchy, collaboration and teamwork are the cornerstones of hackathons. A diverse team is essential, as each participant brings their unique experience and expertise to the project.

What happens at a hackathon?

You mean other than attendees consuming copious amounts of pizza and energy drinks? The first few hours of a hackathon are spent collaborating and brainstorming as teams shape their concept. In Joel’s case, he and his team of eight landed on the concept of “Planetary Pool.”

Imagine a game of pool, but instead of a table, the game is set in space, surrounded by planets and infinite sightlines. The planets serve as the balls, the sun as the cue. Various black holes scattered among stars and represent the pockets. Joel (responsible for design) and his team were awarded “Best Visual Graphics” for Planetary Pool.

Difficult to wrap your head around? You can experience it yourself at Seattle’s first-ever VR arcade, Portal, where the game is available upon request. Note to player: Watch out for the asteroids and space station, they may catch you by surprise when you’re suspended in the galaxy!

What’s next for VR?

When asked what the future holds for VR, Joel said the answer lies in mixed reality (MR). He can easily imagine that in five years, cellphones could be replaced with glasses, or a MR technology that projects a modified reality of your environment. For instance, you’ll walk down the street, look at a restaurant, and instantly view reviews and a menu. Picture Pokémon GO on steroids. Instead of your phone, your vision is the device. A little terrifying, a little awesome.

Taking it a step further, Joel can picture a future where humans and robots work side-by-side, and we’re not talking about smart machines on assembly lines, but robots that are aware of their surroundings and can perceive human interaction. In fact, it’s already happened. The big question is, when will the technology be commercially applied?  “We’re not far off,” says Joel. “People are jumping on the VR, AR, MR bandwagon, and are extremely interested in how they can apply it.”

VR, AR, and MR will continue to be used by businesses as a selling tool. (See some of our favorite adaptations here). As it pertains to AEC, Joel says more and more organizations will incorporate MR into their processes. “Blueprints may not even exist,” instead, we’ll go straight from Revit to a 3-D VR model and be able to experience what a building will look like, simply by putting on a headset.

Using VR, developers will be able to sell spaces, before they’re ever built. He envisions VR as a means to expedite projects, reduce waste, and avoid costly mistakes. “It gives an accurate sense of space, experiencing site plans on a human scale,” says Joel, “You can make necessary changes before construction starts.” And he is proving his point already. While virtually walking through a building he rendered in AutodeskLive, Joel noticed a structural support beam that was missing from the construction documents. By spotting this early, he was able to adjust the design plans and avoid a potential pitfall during construction.

Here at Coughlin Porter Lundeen, it’s a priority to explore the latest technologies and trends. We strive to strike a balance – capitalizing on opportunities that streamline our processes and provide value to our clients, and evaluating fairly those technologies that are fleeting or lack real purpose. As technology inevitably and continually evolves, we’re grateful for events like hackathons that push boundaries and bring bright, innovative minds together.

Learn one new thing a day (in Joel’s case, 100) is a motto he strives to live by. A gamer, inventor and computer wiz, Joel pushes the boundaries of innovation in tech and applies this knowledge to AEC, specifically as it pertains to the integration of VR modeling. With 30 years of experience in AutoCAD drafting and 3D modeling software, his ability to recognize when a repetitive task can be automated and redeveloped is one of his core strengths.