Share: Giant Murals Give Students ‘Something to Look At and Feel Proud’ 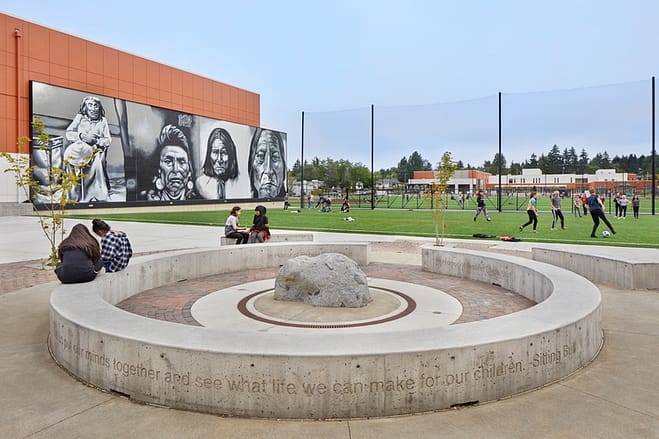 Authored by Coughlin Porter Lundeen’s Cory Hitzemann and Alan Jacobson, this article was originally published in the Daily Journal of Commerce on August 24, 2017. See the original here.

The murals were painted by Native American artist Andrew Morrison for Seattle’s Wilson-Pacific School campus, and preserved in a replacement project.

The campus also includes a few nontraditional school elements, such as the 25-foot Native American murals and a dramatically improved neighborhood storm drainage conveyance system. Both are the result of the project team’s dedication to understanding and adapting to the needs of the community.

The final buildings are uniquely positioned to serve their students, establish goodwill with neighbors, and honor the history of the site and community.

The school buildings presented a twofold challenge: first, marrying the three schools and their distinct programs, needs and grade levels; and second, satisfying a diverse, invested community of stakeholders. Understanding the needs of the community took time.

The project team carefully considered the input and feedback from all stakeholders, including the Native American community.

The 25-foot murals were integrated into the new buildings as part of the structural system.

The previous school on the site, Wilson-Pacific School, was constructed in the 1950s on the site where Licton Springs is located. The springs are still regarded as a part of a sacred religious site by the Duwamish people, and until demolition the school regularly held cultural events, such as powwows and meetings of Native American organizations.

The campus has been reborn as a place for Native American pride to be cultivated and legacies to be preserved. Legacies like that of Robert Eagle Staff of the Minneconjou Lakota. Under his guidance as principal of Indian Heritage School from 1989-1996, students achieved a nearly 100 percent graduation rate, and now the new middle school building bears his name.

Interpretive wall panels in each of the school buildings explain the significance of the mural preservation and share the campus story, including its life as the former Indian Heritage School and the relationship of Licton Springs to native people.

An honoring circle just outside the middle school entrance features quotes from each of four chiefs — Chief Seattle, Chief Joseph, Geronimo and Sitting Bull — and serves as a place of peace, meditation and introspection.

Most obvious to visitors are the murals. Called the “Great Walls of Indian Heritage,” the eight reclaimed murals are up to 25 feet high and displayed prominently around the exterior of both school buildings.

All artwork was created by Andrew Morrison, an Apache/Haida artist who attended Indian Heritage School. Saving the murals is a testament to community efforts, as Native Americans around the country and supporting community groups asked the school district to preserve them.

Special care by the design and construction teams protected them during the removal, storage and reinstallation.

The murals had to be carefully cut from existing buildings, as each one was painted on load-bearing walls. They then had to be safely stored while the rest of the site underwent construction, then installed at their new locations.

Our engineers were instrumental in providing oversight throughout the process to ensure the murals were safely preserved and incorporated onto the new structures.

The larger of the murals were integrated as key shear wall elements into the new buildings. Utilizing the murals as part of the structural system provided them the opportunity to serve a key role in their new locations.

The murals are now a centerpiece of the schools’ designs, and are sure to achieve Morrison’s original vision of giving students “something to look at and feel proud.”

The campus project had a couple other nontraditional considerations: Pilling’s Pond and Licton Springs. The project team was careful to understand how decisions made regarding the site would affect the neighbors.

Pilling’s Pond is a privately maintained waterfowl sanctuary that is cherished by the community. What began as a 12-year-old’s project to rehabilitate three injured ducks grew to an award-winning, internationally recognized habitat.

Founder Charles Pilling was inducted into the International Wild Waterfowl Association Hall of Fame in 1990 and was praised for his ability to raise three unique duck breeds in captivity. After Pilling’s passing in 2001, family friends and neighbors organized under the nonprofit corporation Pilling’s Pond Preservation Society to maintain the pond.

It was important that the project recognize the Pilling’s Pond story and respect its worth to the community. Ultimately, the project ensured that water supply to the pond was maintained and physically secured, safely preserving the waterfowl sanctuary.

The team debated daylighting the stream, but leaving such a deep ravine open posed a safety issue for students. So the group opted to improve the underground storm conveyance system, navigating a congested street to add an additional storm drainage pipe. The solution reduced flooding while keeping students, neighbors and property safe.

The new storm conveyance system required coordination with both Seattle Public Utilities and Seattle Public Schools, and as well as an accelerated timeline, since the system needed to be installed before major onsite construction could begin. Coordinated by Coughlin Porter Lundeen’s civil team, SPU calculated the required pipe size and designed the underground routing, new inlet and oversized manhole installations. The project was designed, permitted and constructed in under a year — one-third of the time that would be typical of a municipal design and construction contract of this type.

Cascadia Elementary School, Licton Springs K-8 and Robert Eagle Staff Middle School benefited greatly from the project team’s ability to look beyond the site boundaries. The schools have created goodwill with invested parties and consequently will fit seamlessly into the neighborhood.

The campus celebrates Native American history and culture, aligns with the needs of its neighbors, and provides a beautiful, functional space for teaching and learning.