Share: Construction for Change makes a big leap thanks to an ‘army of do-gooders’ in Seattle

We were excited to see this feature highlighting Construction for Change, originally published by Sam Bennett in the Seattle DJC on March 29, 2018.

We believe in the work that they do and proud to be a part of the “army” that’s creating international change. To read more about our partnership, check out our article in The Red Line. And see the original article here.

The Seattle nonprofit has quadrupled the number of schools, clinics and other projects it builds around the world. 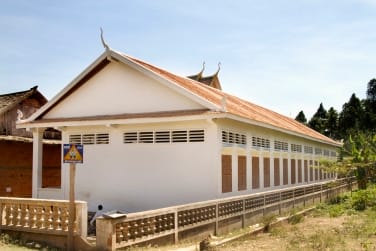 Photos from Construction for Change

Construction for Change helped raise funds and manage construction of this kindergarten building at the Lveate school in Kampong Cham, Cambodia.

When Kevin Hunter took the position of executive director for Seattle’s Construction for Change a year-and-a-half ago, he was committed to breaking new ground.

In short order, Hunter devised a new operational model that would quadruple the number of projects Construction for Change completed each year.

The key, Hunter said, was tapping into Seattle’s broad base of construction expertise.

“Seattle is a place that’s ripe and rich with people who care about philanthropy and care about people from around the world,” Hunter said. “We have a large database of people who want to participate, and an army of do-gooders who are willing to be mobilized.”

Founded in 2007, Construction for Change has a vision that every person — regardless of where they live — has access to well-built spaces where they can manage their health, further their education, or increase their economic mobility, according to Hunter. It bills itself as a “nonprofit construction company.”

From Cambodia to Kenya to Kent (Washington), Construction for Change with its construction industry specialists design, engineer and build projects such as schools, hospitals and clinics — helping organizations that lack construction expertise and financial resources needed to grow.

Projects have included the Women’s Protection Center in Nepal, which fights to eradicate human trafficking and sexual exploitation of women and children, and the Adabawere Maternity Ward plus 4 health clinic renovations for the Hope Through Health organization in Togo, West Africa — providing health care and prenatal care, as well as birthing services in a community of 1,600 individuals.

“I was brought on board to answer the question of how we can scale this organization and take it to the next level and sustain that,” he said. “Our old model was to choose a heroic organization doing phenomenal work and spend a year with them deploying construction projects from design through breaking ground and getting it built. The question was, how do we mobilize construction-sector individuals who want to make a difference for people struggling in the midst of poverty and oppression?”

After a year of analyzing how Construction for Change can be more effective, Hunter said the organization is “moving toward serving partners in fewer places but going deeper in those places, with fewer partners.

In the Kara Region of Togo, CfC helped build a maternity ward at Adabawere Clinic. Crews will return to Togo in October for repairs and renovations to three other clinics.

Construction for Change, under the new model, plans to quadruple its output, building 20 projects a year and having 40 projects in the pipeline at any one time, he said.

To that end, Construction for Change will have its 10th annual Built to Last Benefit at 6 p.m. May 19 at the Museum of Flight in Seattle, with a goal of raising $300,000 to continue to build health care, education and economic mobility projects around the world.

Hunter said Seattle is an ideal headquarters for Construction for Change, because of the city’s large number of construction industry specialists.

For Angela Quiceno, working for Construction for Change in Kenya presented a chance to make a difference early in her construction career.

The 26-year-old project manager is working on an inpatient ward for the Matibabu Foundation Hospital in Ukwala, Kenya. The new inpatient ward will provide better access to health care for the community of Ukwala, since the current hospital does not hold enough capacity for the demand of patients that seek medical attention in the town, according to Quiceno, who spoke via email. With her help, Matibabu Foundation Hospital will increase its facility beds by 52 with the new inpatient ward.

“Communities like Ukwala undergo poverty in a large scale, however they have a richness which no one can put a price on and it’s richness in their soul,” Quiceno said. “Being able to represent CfC in this project has been one of the best experiences I have lived in my 26 years. I have always dreamed of changing the world, and this has been an amazing opportunity towards fulfilling this dream. This has shown me the most humble face of humanity, and there is nothing more gratifying than being able to pitch-in, in providing a light of hope to this town’s health care needs.”

Warren Hendrickson, public health director for the architecture, engineering and construction firm HDR, said his firm has a “passionate” group of professionals who volunteer their time to organizations such as Construction for Change. Hendrickson has worked on projects in Uganda, Nepal and India.

“The type of person who is drawn to this type of volunteer work is more likely to stay with and advance within the company,” said Hendrickson. “We selected CfC as one of our strategic partners because we feel that it is a perfect and complimentary match of our skill sets. They do a stellar job at project management in-country — helping to successfully execute projects. Together, we are able to do great work that neither one of us would have the capacity to develop on our own.”

Hunter said one of Construction for Change’s volunteers, who was fresh out of college and had just started working for a local general contractor, volunteered for an overseas project and was assured by the contractor that her job would be there when she finished. The company, he said, added that it would offer her a promotion upon her return, because of her willingness to contribute to Construction for Change.

“The construction sector is one of the most benevolent and caring sectors in our country,” said Hunter, who has dedicated more than 20 years to working for nonprofits, including Habitat for Humanity. “Even in difficult times, they care for the community and give back to the community.”